In X-Men: Dark Phoenix, our favorite team of mutants experience their biggest threat yet, and it comes from within their own ranks. While doing a rescue mission in space, Jean Grey (Sophie Turner) bonds with a mysterious cosmic force that makes her not only extremely powerful but also more volatile, causing a rift between her and X-Men leader Charles Xavier (James McAvoy).

The Beardict: It’s far from perfect, but we like Dark Phoenix. We even outlined the things that the film was able to do correctly. Be that as it may, we know it has its fair share of problems. Here, we discuss the things that stopped Fox’s final X-Men film from achieving greatness.

The choice of Dark Phoenix Saga as source material. The Dark Phoenix Saga is one of Marvel Comics’ most iconic story lines. At the heart of it was the relationship between the X-Men and Jean Grey ultimately sacrificing herself, but it took four years of storytelling (30+ issues) and character development in the comic books to get there. On the other hand, Dark Phoenix attempted to accomplish relationship building, introducing/resolving internal conflicts and establishing characters introduced in X-Men: Apocalypse in under 2 hours, which resulted in too much drama and uninspired dialogue.  To compare, with Avengers: Endgame, you feel the weight of each scene more because the Marvel Cinematic Universe spent 10 years building towards it.

Dark Phoenix could have translated a lot of iconic lines to the big screen. For example, in the comic books, Jean says “I am fire and life incarnate. Now and forever – I am Phoenix.” The Watcher, the ultimate observer of events in the Marvel Universe (Earth-616), describes what Jean went through: “Jean Grey could have lived to become a god. But it was more important to her that she die… a human.” Instead, in Dark Phoenix, we are given at least 3 iterations of Jean saying “when I lose control, bad things happen,” and Magneto saying “Who’s blood is that?” more times than we can count.

A simple reason why the Dark Phoenix Saga was going to be tricky to adapt? X-Men: The Last Stand (2006) already tackled this, and no matter what your feelings are about that film, it was released more than a decade before Dark Phoenix (2019).  Spider-Man: Homecoming (2017) didn’t feel like a repeat because it chose not to focus on Uncle Ben and the origin of Peter Parker’s powers–it understood that the audience already knows about these things and does not care much about them anymore.

Corporate decisions AKA the Disney takeover. In 2018, it was reported that Walt Disney Co. was in talks to acquire Fox. On March 20, 2019, it became official. How does this affect X-Men: Dark Phoenix? Dark Phoenix was originally set to be released in November 2018, but was later pushed back to February 2019, and then finally to June 2019 because of a number of factors: script re-writes, production re-shoots, and competitive scheduling. This delay unfortunately  pushed the release after Captain Marvel (which coincidentally shared several similarities–i.e. shape-shifting alien race, space exploration, male figure hindering an overpowered titular female character from reaching her true potential, a line about humanity/emotions making us weak but not really) and Avengers: Endgame (it significantly elevated the bar for superhero movies, and Dark Phoenix released barely two months after it is problematic). While Dark Phoenix in itself can hold its own, by comparison, it feels rather small-scale, disjointed, and abrupt. Where Marvel Studios is a prime example of franchise building/corporate synergy, Fox’s X-Men is not. Disney’s takeover of Fox does not help its case either, and despite Dark Phoenix’s (sort of) cliffhanger ending, one can’t help but remember that a reboot is just on the horizon. 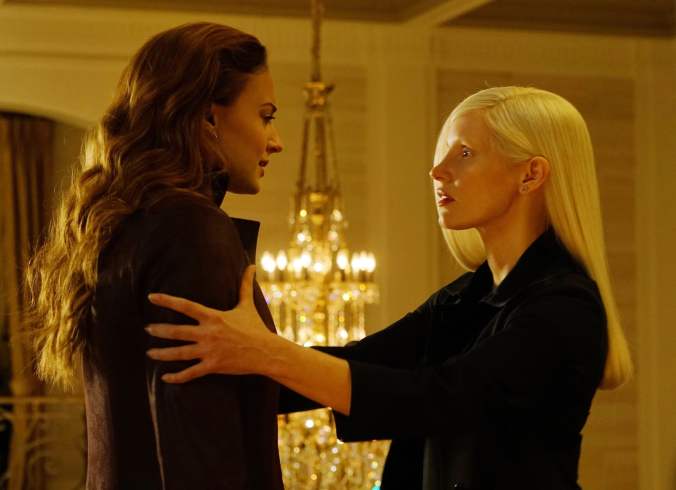 A “boring” villain in Vuk. Yes, the antagonist of X-Men: Dark Phoenix is named Vuk of the D’Bari empire. If you missed it, it’s not your fault because the film didn’t spend much time developing her (except for a short flashback). Jessica Chastain did what she could with the material, but hiring an Oscar-nominated actress to play a near emotionless character is such a waste. Because of Infinity War and Endgame, the gold standard of villains now is Thanos, and Vuk is obviously unable to establish a connection and evoke empathy from the audience.

The little things (which could have gone a long way). For a movie that was supposedly set in the 90’s, Dark Phoenix felt like it could have happened in present day, a stark contrast to Captain Marvel which was loaded with 90’s references and did not shy away from marketing itself as such from the very first trailer.

Someone who has followed the X-Men would be aware that Magneto’s new home-base was actually Genosha, a fictional island nation that was granted to him by the United Nations to serve as a mutant sanctuary. However, the movie does very little to explain it, and instead shows us a birds-eye view of what could be just another small island off the coast of Manhattan (Fun fact: Genosha is supposedly in Africa. A simple subtitle telling the audiences where they were would have helped establish the setting). Because of this, it seemed like the entire movie happened in New York, which reinforces the small-scale comment we made earlier. Remember, this was set 9 years after X-Men: Apocalypse. Magneto had nearly a decade to recruit/”save” mutants, perhaps even meet some iconic characters from the Brotherhood. And yet, the best we got were two underdeveloped mutant “goons” whose names we cannot even remember right now. 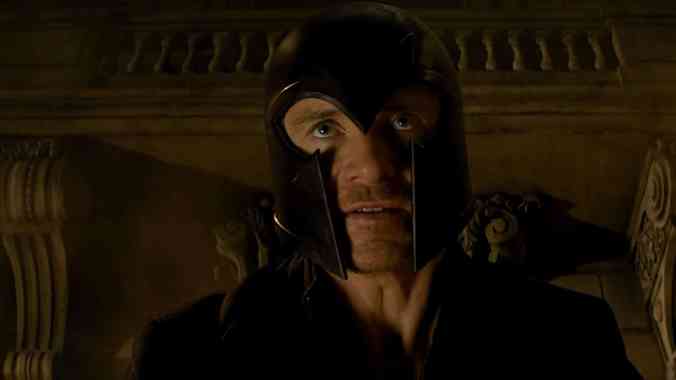 Baggage from previous movies, inconsistencies, and timeline issues. Unlike the MCU which is a well-oiled machine with collaborative directors, each X-Men movie tends to veer away from what has been established by introducing their own thing, breaking the continuity in the process. With reinvented characters and a solid story, X-Men: First Class (2011)  is one of the best X-movies out there, and it was a great reboot to a franchise that badly needed one. Unfortunately, although Days of Future Past (2014) was awesome, it brought back the old cast and prevented fans from moving on. It was then followed by Apocalypse, which featured the new cast again. You get the picture.

Additionally, the decade jump from Apocalypse (2016) to Dark Phoenix was unnecessary because both films made use of the same core characters. The ending of Days of Future Past already showed us a glimpse of where all the “present-day” X-Men should be, which means that at some point, the core X-Men would be back together, with Charles once again leading the School for Gifted Youngsters. Since we’re following the same timeline, we can assume that Jean Grey/Phoenix, after all the conflict and supposed death, would head back to Earth and rejoin them.

Characters which no longer have a place in the story. Mystique/Raven (Jennifer Lawrence) and Quicksilver (Evan Peters) are good examples. Because of the timeline alteration, Mystique ends up as one of the X-Men’s senior leaders instead of joining the Brotherhood of Evil Mutants, and is quickly killed off (her implied death was even shown in the trailer and discussed by Jennifer during interviews). Quicksilver, on the other hand, conveniently gets injured early on in the film, and he does not even get a scene with Magneto (it was teased in both Days of Future Past and Apocalypse that he is Magneto’s son). It seems both Mystique and Quicksilver are just there to add to the cast star power, not because they are needed.

Simon Kinberg at the helm. Kinberg has been part of the X-Men franchise since The Last Stand, and has even gone on to write and produce other movies such as F4ntastic Four. (Okay, that isn’t saying much, but still). But the point is that as far as Fox’s X-Men universe goes, Kinberg is pretty much “the guy” to thank/blame. In fact, he is so embedded in it that the core X-cast members love him, so much so that they lobbied for him to direct Dark Phoenix (Jennifer Lawrence said that she would not return if Kinberg was not directing). It says a lot about him being a better choice for the cast & movie than someone controversial like Bryan Singer. However, this big budget, high-stakes, supposed epic finale to a 19-year superhero franchise was Kinberg’s directorial debut. Endgame was  the fourth film Joe and Anthony Russo directed for the MCU,  and they worked with duo Christopher Markus and Stephen McFeely for the screenplay.   Kinberg not only directed Dark Phoenix but also wrote the script, so no matter what great ideas he came up with, there was probably a lack of check and balance and outside perspective for the movie.

Lack of Wolverine. Hugh Jackman as Wolverine has been the most consistent thing in the X-Men franchise. Because Jackman plays Logan so well, even the worst X-Men movie always has him as a silver lining. Going back to earlier marketing of Dark Phoenix, a substantial number of fans’ negative sentiment around the film was caused by the fact that Wolverine was not in it. It’s not that Wolverine has to be in every X-Men story (in our opinion, he is overexposed), but since this is the final film of the franchise, it makes sense that they find a way to put him there. 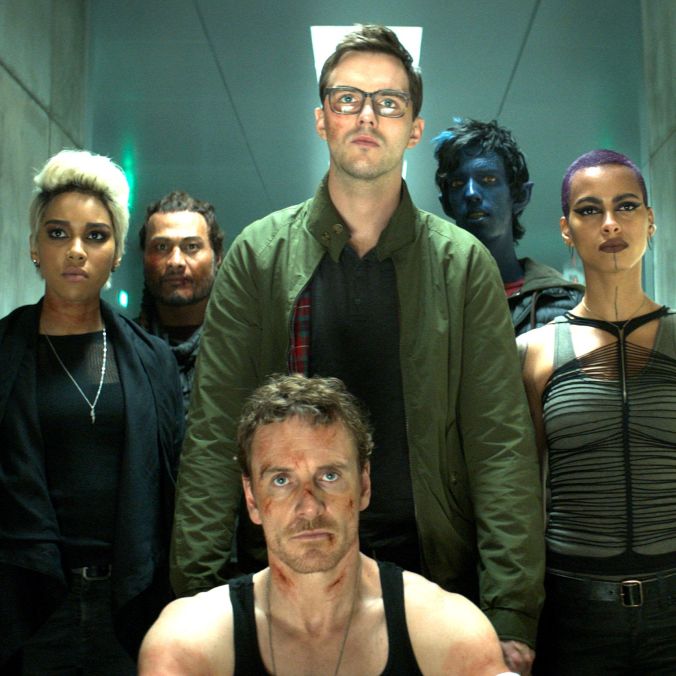 Now that you’ve read what stopped the greatness of X-Men Dark Phoenix, check out the Beardict on what it did correctly here.

Photos courtesy of 20th Century Fox. X-Men: Dark Phoenix out now in cinemas near you!